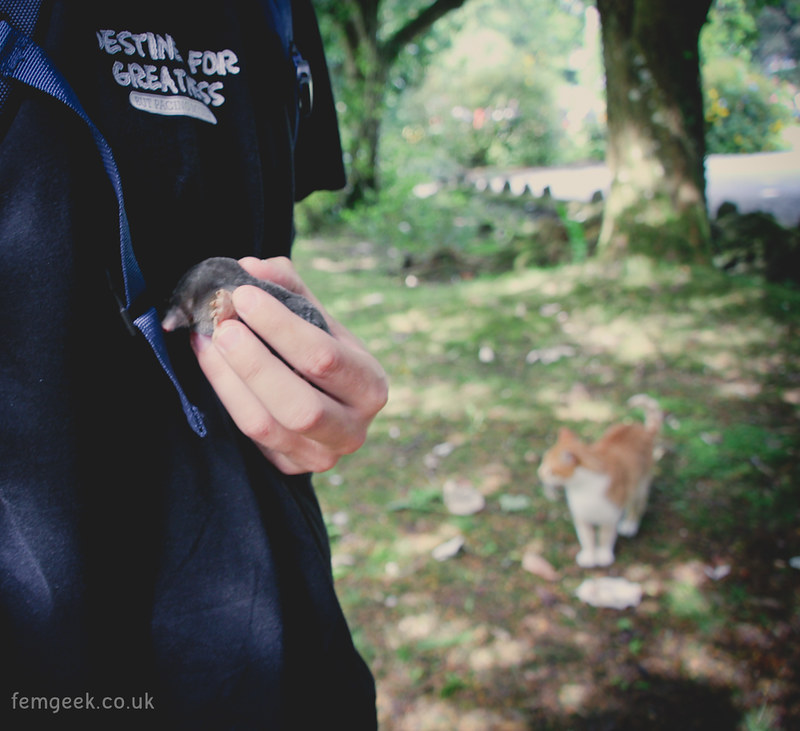 I thought this deserved a post all of its own, because lets me honest, how often does ones boyfriend get bitten by a Mole? Actually, that sentence only really applies to everyone else’s boyfriends…with Gregory anything can happen!

We were walking up to the play are at Manor House Safari Park when we saw what we thought was a wallaby that had escaped from the wallaby enclosure. Next to this wallaby were two women, hopping about and gingerly trying to shoo the creature away.

Turns out it wasn’t a wallaby but a giant mole big ginger cat with a mole. The blind tunneling kind not the big hairy on your face kind.

Greg runs forth, shoos the cat away and picks. up. the. mole….but not before the cat goes in for one almighty bite. Fact of the day people. Moles SQUEAK! It was horrible.

So at this point Greg is running around the grass, mole in hand, cat sadistically rubbing against his legs trying to charm the mole back into his sharp toothy grin when the mole bites him and gives him all sorts of plague and rabies and mole diseases.

He wraps the mole up in his shirt, does a few more laps of the grass and deposits the mole in some undergrowth away from the cat. Hopefully he made it.

So yeah, thats how we ended up spending our last night on Holiday in a&e waiting for a Tetanus jab!

Throughout out all of this I was too busy standing still with the audience of people too shocked to really do anything! (I would have picked up the cat!) but I did manage to take one photo. Not that I’d need it for people to believe us. This sort of thing happens a lot. (Pigeon in HMV, dragonfly in GAME the list goes on)